are beautiful birds to watch, especially during breeding season, when they build beautiful nests. 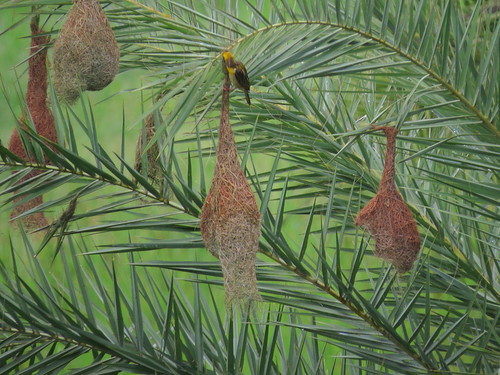 Baya weavers are social and gregarious birds. They forage in flocks for seeds, both on the plants and on the ground. Flocks fly in close formations, often performing complicated manoeuvres. They are known to glean paddy and other grain in harvested fields, and occasionally damage ripening crops and are therefore sometimes considered as pests. 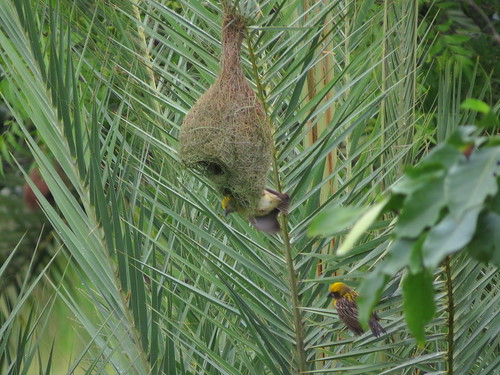 They roost in reed-beds bordering waterbodies. They depend on wild grasses such as Guinea grass (Panicum maximum) as well as crops like rice for both their food (feeding on seedlings in the germination stage as well as on early stages of grain[6]) and nesting material. They also feed on insects (including butterflies[7]), sometimes taking small frogs,[8] geckos[9] and molluscs, especially to feed their young.

The breeding season of the baya weavers is during the monsoon.They nest in colonies typically of up to 20-30, close to the source of food, nesting material and water. Baya weavers are best known for the elaborately woven nests constructed by the males.

The males take about 18 days to construct the complete nest with the intermediate “helmet stage” taking about 8 days. The nests are partially built before the males begin to display to passing females by flapping their wings and calling while hanging from their nests. 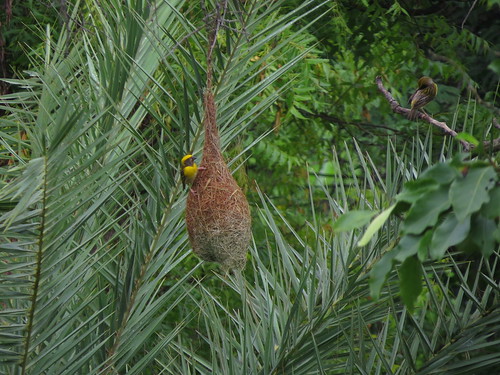 The females inspect the nest and signal their acceptance of a male. Once a male and a female are paired, the male goes on to complete the nest by adding the entrance tunnel. Males are almost solely in charge of nest building, though their female partners may join in giving the finishing touches, particularly on the interiors. Females may modify the interiors or add blobs of mud.

Here’s a video I took, some time ago, of a female doing this:

Both males and females are polygamous. Males build many partial nests and begin courting females. The male finishes the nest only after finding a mate.

These birds have also entered local folklore and culture. A widespread folk belief in India is that the baya sticks fireflies with mud to the nest walls to light up the interior of the nest at night!

In earlier times, the baya weaver was trained by street performers in India for entertainment. They could pick up objects at the command of their trainers. They were trained to fire toy cannons, string beads, pick up coins and other objects. These uses have been noted from the time of Akbar, the Mughal king!

And sometimes, abandoned nests are used by Munias, and for the first time, I spotted a Rufous Treepie on an old nest. Whether it was picking insects, or trying to remove nesting material, was not clear.

A reference to the bird by Ain from around 1590:

The baya is like a wild sparrow but yellow. It is extremely intelligent, obedient and docile. It will take small coins from the hand and bring them to its master, and will come to a call from a long distance. Its nests are so ingeniously constructed as to defy the rivalry of clever artificers. — Āīn, quoted in the Hobson Jobson

Here’s a video where the first line of the song refers to the Baya Weaver:

So….these birds have been around for a long time now, but each moment with them is also a delight. Here’s our group, on 17 July 2016, starting our outing, not knowing that so much of delight was in store for us! 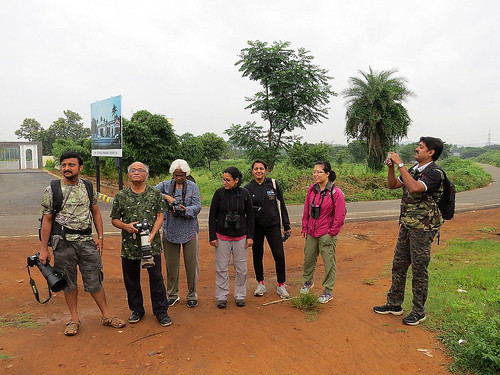