A K Raju, wildlife photographer, writes about this image:

The bold, the beautiful and the scared. So unexpected. The little fellow, a Coppersmith Barbet on the right, was bold enough to threaten a larger Babbler (center bird) that started to back off, but immediately the bird on the left hopped into my frame and came to its rescue. He was bold enough to aggressively jeer at the Coppersmith and back him off. Both Babblers are same size yet one is scared of the Coppersmith while the other is courageous enough to scare him off. So individualistic. Although instinct-driven, each life form has its own character.

On the technical side, he adds:

With digital technology getting better and better, I have learnt that it’s better to put the ISO of the camera to the highest it can handle and keep the shutter speed as high as the light allows so any unforeseen action is never missed for want of shutter speed. This is one such instance. 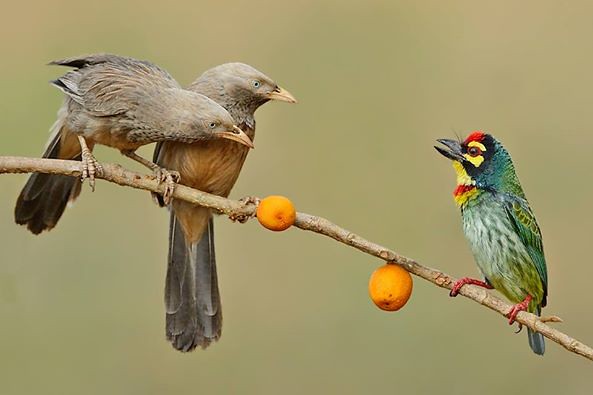 Raju further muses upon the past….

In the early eighties when Bangalore had suffixes like ‘Garden City’ or ‘Pensioner’s Paradise’, a handful of us were wildlife photographers. We, the “wildlife photographers” were considered foolish people with no better work. We were the only people to be seen commuting at six in the morning.

It would take 25 minutes and 10 kms to be out of the city into lush green and a paradise for birds. If anyone owned a vehicle, the road was his own. We left home and negotiated the streets.. that was approximately when the sun rose. The far east where the sun rose was the far end was Mahatma Gandhi Road (yes! MG Road). It would be a great sight to see sunrise on this road along with the early mist/fog that would make the sun look still dull and sleepy. The British era structures along the right side, a long walk way with a army maintained park on the left that would never be used by anybody, few cyclists, hardly a couple of cars.

The cool air would be abundant with oxygen that would encourage you to take deep breaths feeling the freshness in your lungs. A few walkers in shorts and shoes, a legacy left by the British, walking on the road. Footpaths used to be as badly maintained as they are now. Everything moved at such a slow pace, it easily showed everybody had time for himself and was in no hurry to start the day.

As the city grew into a commercial and IT Hub, things changed. Now, it takes about one and a half hours to get out of the city and ten kilometers from my place and I am still in the suburban extensions. Today, one has to travel 40 kms to get out. All this has forced us to start by 4.30 or 5 AM in the morning. We have be out of city by the sunrise . If you are late you are stuck in the morning traffic jams.

A few days back I had to travel to a lake hardly a few kilometers from my place. I decided to start a little late since the travel time was not much. As I drove along MG road….there! The sun was raising at the other end. The early mist was indeed making the sun look dull and sleepy, the morning fresh oxygen that would encourage you to breath deeper was still present in the air but the British era buildings were replaced by high rise modern structures. The long walkway on the left was replaced with hurrying Metro trains that made frequent appearances. The roads were already full. Each person had his own pace, anything but slow. The footpaths were broad and clean. Walkers and joggers, gazing into nothing, were hurrying as if they were already late into the day. It looked so different from what it used to be.

But I wondered if its worth complaining. I had changed too. I am no longer the slow lazy Bangalorean. Technology had taken over my life too. My own cameras stand testimony to that. As I came to the end of MG Road I thought the skyline of this place might have changed but it still looks beautiful. Differently beautiful. May be everything in this world is always beautiful, what changes is the way we look at it.