Fact: I had the cataract removed from one eye (with laser surgery) on Thursday, 12th March, 2015.. The other eye, Friday, 13th March, 2015. Reasonably painless procedure.

My vision was manageable, but was already giving enough fuzziness through my spectacles to make me want to go to the eye surgeon.

Everyone told me how simple, and painless, the procedure is, these days. Did this stop my worrying about it? Of course. I was very, very calm, cool and collected. On Tuesday night, I even had a pleasant dream. In the dream, the eye doctor unmasked herself in the operation theatre…. she was actually a demon, and proceed to poke out my eyes with a hot trident. I calmly woke up and calmly did not sleep the rest of the night.At some point, my daughter called me up, asking, “Would you like to see your grandchildren while you are still able to see them?”, thus completing my serenity quotient.

I was quite suprised at the counsellor that the ophthalmologist sent me to. This lady, with a bright smile, breezily announced, “Madam, cataract operation, no risk at all! Absolutely no risk!” I told her that no surgery came without a certain risk, however negligible it might be…I expected to go to the optometrist…but I got Ms. Optimist! I had to tell the doctor that he needed to counsel the counsellor not to make such tall claims.

Many friends offered to be with me on both days of the surgery, but the fear of being thought a wimp (even though I was one) kept me from accepting. So one friend dropped me at the clinic, and spent a little time with me before she went home to accept a conference call. During this time, I must say, one of the nurses plied us with a lot of attention, even giving us a calendar printed by the clinic, and stood quite close until my friend gave her a hundred-rupee note. She was going off-duty at 9am and would not be around when I came out of the surgery, so I really don’t know what the “lubrication” was for….but I hope there was chicken biryani in her home that evening, and that she thought of us!

Coming in at 7.30am, my friend and I realized that the surgeon would not come in before 9am, so we went next door to the Adigas eatery and had some brefus and excellent filter coffee…and then came back. The clinic was airy, clean and comfortable.

I was soon given the latest Surgery Fashion Clothing to wear. A robe that was, luckily, not open at the back ( and hallelujah, I was not asked to remove my clothes) was draped tastefully around me, touching me at odd points, dropping off me at others, and tied at the back. A cap, exactly like the ones worn by members of catering services at weddings, who served the food on our plantain leaves, was set atop my short-cropped hair luxuriant tresses. I now had made the transition from DM to Patient no. XYZ. 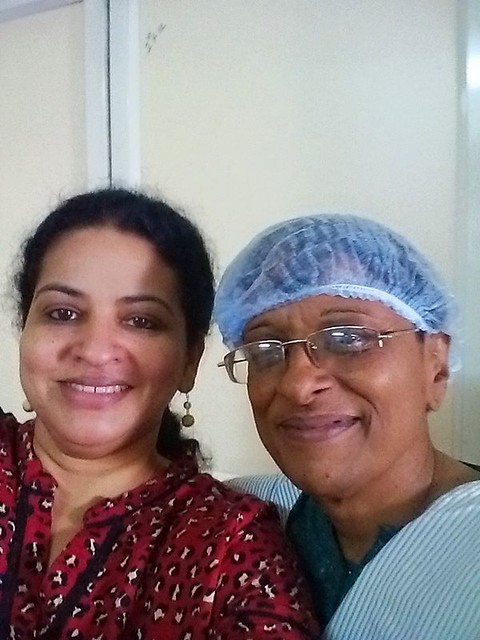 My friend left after wishing me luck, and I opened the day’s newspapers. The usual…one murder, one scandal, one rape, one protest…the only thing worth going through were the comics and the puzzles!

At about 9.20am, after I had done the day’s newspaper crossword and got all the details about the local starlets’ love lives from the tabloids, the nurse and I walked into the operating theatre (thankfully, I was not wheeled in. I don’t think I could handle the drama of that.) I lay down on the table. The eye that would not be “done” was covered, as was the rest of my face. My hands and feet were bound to the table, and this certainly did disturb me, but I didn’t want to let my craven cowardice slight misgivings show. A clip of some sort was attached to one of the fingers of my right-hand. A band-aid kind of strip was laid flush with my open left eye. When a sheet was pulled up to my chin, I already felt like a dead body. Only the bright lights shining into my one open eye, from above, kept my soul from rising free in the manner described by so many alienists.

It was at this nadir of the morning that the surgeon walked in and bade me a chirpy “hello”, to which I mumbled a response. She was very kind; she kept describing, throughout the 20 or 25-minute procedure, what she was doing.

When the cataract was emulsified, there was a feeling of pressure, and there was some unearthly musical whine (think Close Encounters of the Third Kind!) that the laser machine made while the incisions were being cut into the cornea. But as the surgeon had given me some anaesthetic drops which actually made that bright light above me (a microscope was also being used) go dim and grey, I didn’t mind anything. I kept taking deep breaths, and consciously relaxing, only to start again when I realized I was holding my breath once more! The procedure was finished, expertly, and a thick padded bandage applied to the eye.

I got off the table with just a little feeling of soreness in the “done” eye, and walked back to my room, close by. For some reason (not fear, ofkose!) my throat was dry, so I drank a lot of water, closed the other eye, too, and meditated (no, not medicated.)

After a couple of hours, the nurse came and removed my bandage, and my friend Chandan, who had come to take me home, got a list of ruinously expensive medicines. I was asked to get home and use my eyes normally.

The list of eye-drops (sorry, in today’s world I must call the i-drops, and I certainly did have an i-Pad over the left eye!) also came with a 3K (in Tamil,Karunanidhi Karuppu KannAdi). This was a kind of oversized, wrapround pair of dark glasses which instantly made me look like a canvassing politician, or a B-grade cine artiste. I was supposed to wear this when outdoors, to prevent dust from getting into my eyes. Anyone who can completely exclude dust in a city like ours deserves a medal, and these glasses were more for my psychological satifaction. I must say, looking like a cheap politician/actor did not add to that! The first day, I thought I’d use my own shades, but realized that something that also covered the side of my face would be better.

The next day, after surgery, I had to buy the same medicines again (“For the right eye, Madam, keep them separate!”) but there were no dark glasses! Why? “But madam, you got one pair yesterday!”. “No, I gave back those glasses, because I had my own dark glasses…but now I prefer the wraparound type. Anyway, why did you leave out the glasses without asking me?” I queried the nurse. I got the glasses, nice cheap China-made ones, which further dimmed my already bright-eyed beauty. I refuse to take a selfie of myself with those things on!

I had specifically asked if the “normal usage” of my eyes included laptop work, and yes, it did. So of course, I logged into FB when I reached home…and got it in the neck from friends about eyestrain and sleeping and spoiling my eyes. (List of responses below.) Not ONE person asked me what the doctor had said I could and could not do…they all knew better, and gave me all sorts of instructions (not advice, which I can take or not,but instructions, which I must follow.)

No one seemed to think that I was under the eye doctor’s care, and that I would implicitly and explicitly follow do’s and don’ts…that these were my eyes, and I would not take any risk with them! I had a follow-up on Saturday the 14th (I drove myself to the clinic and back.) I’ve had another on Thursday the 19th.

I have the feeling that I will be putting drops into my eyes for the rest of my natural life, having become habituated to it over four weeks!

The best of the responses to my eye surgery:

Well, I realized that all the commandments were out of concern and affection, so I just listened…and did not react too much. Putting in drops of one sort or another pretty much kept me housebound, and I napped when I felt like it. It felt very good to slothify for some days!

The surgeon who carried out the procedure on my right eye the next differed in minor procedural details from the lady who did it the day before. So it was quite interesting to realize that even in a simple procedure like this, each surgeon has a slightly different approach. I asked Friday’s surgeon to describe what he was doing; it would, I said, give me information and allay my anxiety. Because of this, I got quite an interesting talk on the history of cataract surgery!

The insurance was taken care of rather easily and being a typical insurance plan, covered only 80% of the surgery costs, and a small percentage of the medications I had to buy. It was not only my cataracts but some of my bank balance as well, that were extracted! (Figures provided on request.)

I came home on Friday with two white-hazed eyes instead of one, and when there was some clearing of that haze, I found that I had pretty good vision out of both eyes…and that the colours were now so vivid. I had not realized how the cataracts must have dimmed my sight over the past 2 years or so! However, I had to instill various drops in my eye,for the next few weeks, and one of the i-drops dilates the pupil. So every time I begin to have clear vision, I know it’s time to fuzz it up again!

Earlier, I used to wear glasses (for myopia) all the time, and remove them for close-up work. Now, it’s the reverse, and getting into the habit is still not a very successful effort! I keep trying to take my glasses off when I lie down (I’ve worn glasses for myopia from age 12); when I can’t find my glasses, I feel I should take off my contact lenses (after all, I wore them from age 16 to 54!)…then I feel foolish when I realize that I’d better not touch my eyes!

The funniest part is sitting at home because every hour on the hour (oh, it’s time now!) I must put in 1, 2, 3, or 4 different types of drops, one or more of them. I call it having dropsy…or drops-eye!

OK…time for the next set of drops in both eyes…truly I am singing “Eyes, eyes, baby!” these days!

Been listening to a lot of good music :D

Been getting a lot of advice. People never want to ask how I am feeling. They call only to give advice, most of which is….wrong.

More later. I want to share that yes, I did have some tension about “what if it goes wrong just for ME?” ….the right eye will be done tomorrow. hides the crossed fingers

The doctors at the Prabha Eye Clinic are very good. I can’t say the same of a counsellor who actually told me twice, “Madam, surgery absolutely no risk.” I’m all for having an optimist (not an optometrist) as a counsellor…but this was a bit much!

Also, the insurance, which, like a loincloth, will barely cover my nakedness and will still make me pay large sums….

Will write a consolidated post later. Cataract removal…who knew there could be so much humour in it?