He started out life as a small dash on the pregnancy-test kit. He was a peanut in his first scan, then he became Thupples, slang for “thappalai” or frog, because he looked like a tadpole….all while he was inside his mother.

He officially became Kalyan Mohan Shaffer on this day, two years ago. 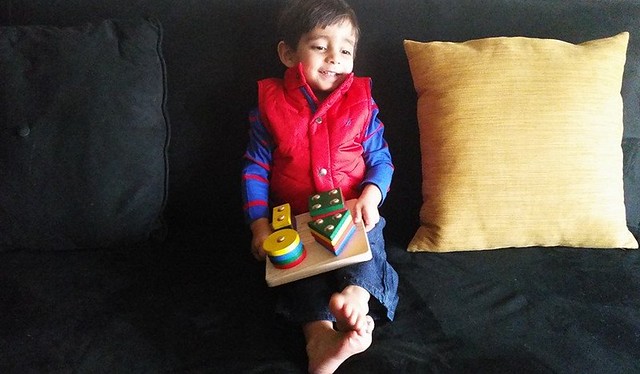 Now, he is The Booda (no good reason why, except that his elder sister is Boodi Ma or Boodi)..and is also Kallubhai as in the best Mumbai mafia.

His mother has this to say: “Two years already. Phew, survived it this far. Glad to be able to follow Indian tradition and clad him in new clothes today. Thank you,Lynn. Can the magic of longer, stronger sleep begin now please ? These 2 years have certainly been made longer if I add the hours I’ve been awake with him: more like 3.5 years. The personality is emerging. He is strong willed and has a controlling nature and does NOT like to be led. I hope his affectionate side strengthens, and that he grows to harness the mechanical intuition and intelligence he already has to expand it into general astuteness. On a side note, I hope he grows up to like American football. He can always have an easy, good party if so.”

My darling grandson…here’s wishing you health, happiness, and peace of mind!