As I came by bus into Linkoping, I caught sight of this very large hoop adorning one of the roundabouts: 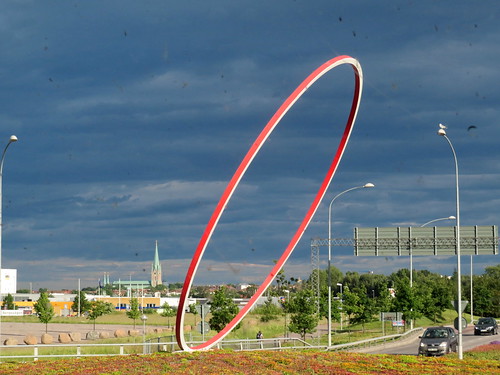 I caught sight of a statue (life-size) of a dog, placed looking askance at the hoop, as if to ask, “What should I do?” only when the bus sped past.

But a few days later, when PC and I walked down to Biltema and the IKEA shop, I was able to get a much better picture of this dog-and-hoop, and here it is: 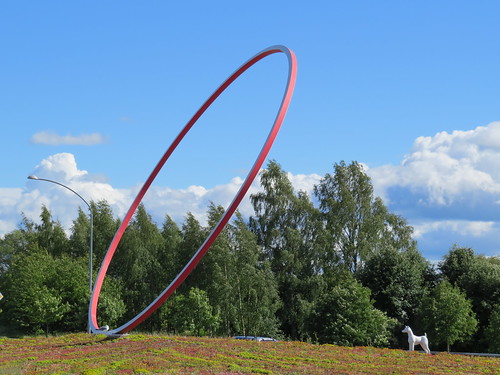 You can clearly see the dog looking at the beautifully-balanced hoop!

Trying to get more information about this sculpture, I googled the following words: “roundabout dog sculpture linkoping sweden”…and got

“A roundabout dog (Swedish: rondellhund, originally Östgötsk rondellhund, “Östergötland roundabout dog”, a pun on västgötaspets) is a form of street inThe roundabout dogs started appearing in Linköping, Östergötland, Sweden (and were therefore originally called: de östgötska rondellhundarna), after a sculptured dog that was part of the official roundabout installation Cirkulation II (English: Circulation II) by sculptor Stina Opitz had been vandalised and later removed. The original dog had been made of concrete, and Stina Opitz was planning to make a new version of it after the vandalism, when someone placed a homemade wooden dog on the roundabout. The dog was given a concrete dogbone by another anonymous artist. Soon after the media reported these developments, roundabout dogs started appearing in various places around the country.

Peter Nyberg (maker of the first ‘Rondellhund’) of Linköping told tabloid Expressen that his dogs were intended to “mock the state-employed artists, who get so much money to make sculptures that we can do just as well ourselves”. In some smaller towns where there were no roundabouts, dog sculptures were placed in ordinary intersections with traffic islands.

The Swedish artist Lars Vilks made a drawing depicting the Islamic prophet Muhammad as a roundabout dog. This was published in a Swedish local newspaper in July 2007. It provoked accusations of blasphemy from some Muslim groups in the Middle East. (See Lars Vilks Muhammad drawings controversy.) The 2010 Stockholm bombings are considered to be sparked partially because of the cartoon.”

That was certainly something to make me think…. I read on:

“In April 2007 Bjorn Andersson started building roundabout dogs in his workshop south of Stockholm. His mission is to keep rondellhund at Philanthropic Street Art level and to give a moment of enjoyment to all people traveling by car. His dogs have traveled the world to places in the USA, in Australia and in the UK.”

How surprising! The wiki goes on further to say:

“In 2009, similar dogs started appearing on some of the roundabouts in Hemel Hempstead, Hertfordshirestallation, that began occurring in Sweden during the autumn of 2006, and continued for the rest of the year with sporadic occurrences since then. The phenomenon consists of anonymous people placing homemade dog sculptures, typically made of wood (or sometimes plastic, metal or textile) in roundabouts (traffic circles). Occurrences were reported all over Sweden, and the phenomenon also spread to other countries, such as Spain after it was mentioned on Spanish television (PuntoDos). Swedish tabloid paper Expressen even placed one at Piccadilly Circus.”

The dog I’ve photographed is not a wooden dog in this sense, and now I am unable to understand if the hoop was placed there first and the dog “added” as part of the “roundabout dog” theme, or whether they do belong together.

So…in the process of finding out more information on the net, I seem to have opened up more of an enigma! I wish there was someone in Linkoping whom I could ask..I’m afraid the language (and the fact of most sites being in Swedish and not translating too well) IS proving a barrier to learning a lot about what I am seeing around me.