has a name derived from the Sinhala word for the Red-faced Malkoha; Mal-Koha meaning flower-cuckoo. They are large birds in the cuckoo family,Cuculidae, all in the genus Phaenicophaeus. (That name derives from the Ancient Greek phoiniko- “crimson”, and phaes “eyes” or “face”.)

In Karnataka, I see two of these birds; the more common is the

This is a shy bird that eats a variety of insects, caterpillars and small vertebrates, and,occasionally, berries too. It is not a powerful flier.

According to the wikipaedia, there are 11 varieties of the Malkoha in the Indian subcontinent.

Here’s the Malkoha in the Neem tree: The way the bird can normally be seen, skulking in the foliage: The other Malkoha I’ve seen in Karnataka is the This bird talks about amongst thickets like the Coucal or Crow-Pheasant, searching for food; insects, lizards, fallen fruits and berries.It runs swiftly through undergrowth looking like mongoose. It is a feeble flier, but ascends trees rapidly, hopping from branch to branch with great agility, like the Coucal.

Malkohas are non-parasitic cuckoos, building their own nests and laying eggs.

Here’s a short video of the Sirkeer that I took at Galibore, in the Cauvery Wildlife Sanctuary:

and here it is, eating berries: 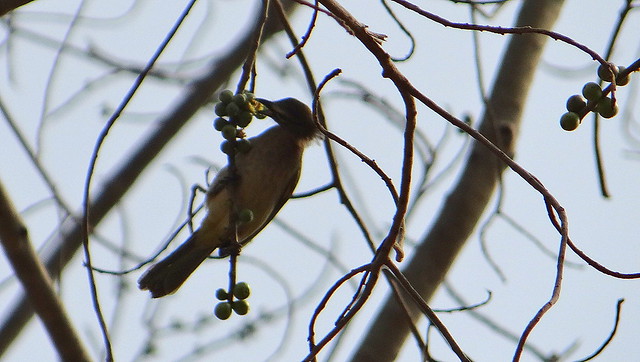 It’s always a delight to spot these birds, and observe their behaviour…but they generally manage to disappear in a short while!